Sep 10, 2017
10:17 pm (IST)
Following the timeout, Deepak Kumar is taken down by the Titans once again. Wazir Singh then succesfully raids to revive Deepak Kumar but in their next raid he is taken out confortably. As for Titans raiders, they are just trying to waste time as they have got a huge lead. Titans lead 36-17 with two minutes to go.

Sep 10, 2017
10:12 pm (IST)
Mohit Chillar was the last man standing for Haryana and when he went for the raid, he was comprehensively taken out by the Titans. This has resulted in an all-out as Titans now lead 32-16 with five minutes left in the second half.

Mayur goes down once again after he was revived. Maghsoudlou then wins a touch point for the away side. Wazir Singh also cannot add to Haryana’s score as he is pinned down by the defenders. Rahul Chadhuri wins a touch point again as Titans now lead 29-15.

Sep 10, 2017
10:05 pm (IST)
Mayur Shivtarkar is not able to leave his mark on the game as he is once again taken out by the Titan defenders. Rahul Chaudhuri extends the lead with a stunning touch point. Deepak Kumar Dahiya bites the dust during his raid. Rahul Chaudhuri’s streak is broken as he is comprehensively caught by the Haryana defenders. Titans now lead 23-15

Sep 10, 2017
9:55 pm (IST)
Super raid from Nilesh Salunkhe and he also affects an all-out. Four more points for Titans as they are taking control of this match with great style. Prasanth Kumar is once again taken out by the Titan defenders. Rahul Chaudhuri comes up with yet another touch point. Haryana lead 20-11 now with five minutes played in the second half.


Sep 10, 2017
9:53 pm (IST)
Maghsoudlou starts the second half by getting caught by the Haryana defenders. And its a super tackle as well and he concedes two points. But Wazir Singh cannot make the most of this Titan lapse as he too is caught in the home side’s raid. Nilesh Salunkhe then extends their lead by winning a touch point. Titans lead 14-11.

Sep 10, 2017
9:42 pm (IST)
Half-time: A string of raid points won by the teams as both Haryana and Titans are short on players on the court now. Rahul Chaudhuri continues his glorious run in the match and wins a raid point. While Wazir Singh does the same for the home side. Titans now lead 12-8 as we head into the half-time.

Sep 10, 2017
9:36 pm (IST)
Haryana are making a comeback into the match. First they take down Maghsoudlou and then in their do or die raid, Prasanth Kumar wins a touch point. However, Titans’ Nilesh Salunkhe wins a touch point and also a bonus point in his raid. Wazir Singh then wins his first point of the day for Haryana. Titans now lead 9-6 with six minutes to go in the half.

Sep 10, 2017
9:31 pm (IST)
Titans continue to rake in the points as Wazir Singh is take out now. Maghsoudlou wins a touch point to increase the away side’s lead. And the, in Haryana’s do or die raid, Mayur wins a point and Titans now lead 6-3 with 10 minutes gone in the first half.

Sep 10, 2017
9:25 pm (IST)
Haryana open their account as they bring down Rahul Chaudhuri in stunning fashion. And in the do o die raid, Deepak Kumar Dahiya gets over anxious and tries to go a bit far and is caught by the Titans defenders. But Rahul Chaudhuri is again ousted and they now lead 4-2 with five minutes gone in the first half.

Sep 10, 2017
9:21 pm (IST)
After Telugu Titans won the toss and opted for the left hand side of the court, star raider Rahul Chaudhuri gives them the lead with a brilliant touch point. Wazir Singh is then taken down by the away side and they extend their lead. Titans’ defenders make it 3-0 as Haryana’s Prasanth Kumar is the latest to bite the dust.

Sep 10, 2017
9:08 pm (IST)
Hello and welcome to the live blog of the Pro Kabaddi League 2017 match between hosts Haryana Steelers and Telugu Titans. 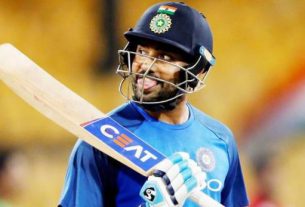